Randall & Quilter Investment Holdings (R&Q) is a long-established UK and US insurance business led by an experienced team. It is focused on two core strategies: to drive commission income from writing niche books of business using its licensed carriers and to grow an industry leading provider of exit solutions for legacy/ run-off insurance assets to vendors in the US, Bermuda and Europe. 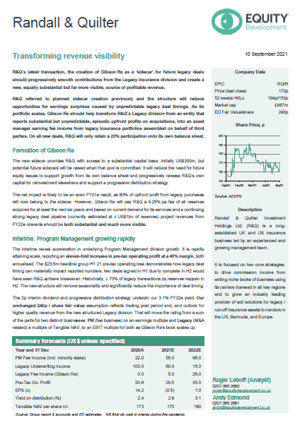 R&Q’s latest transaction, the creation of Gibson Re as a ‘sidecar’ for future legacy deals, should progressively smooth contributions from the Legacy Insurance division and create a new, equally substantial but far more visible, source of profitable revenue.

As its portfolio scales, Gibson Re should help transform R&Q’s Legacy division from an entity that reports substantial but unpredictable, episodic upfront profits on acquisitions, into an asset manager earning fee income from legacy insurance portfolios assembled on behalf of third parties. On all new deals, R&Q will only retain a 20% participation onto its own balance sheet.

The new sidecar provides R&Q with access to a substantial capital base, initially US$300m, but potential future sidecars will be raised when that pool is committed. It will reduce the need for future equity issues to support growth from its own balance sheet and progressively release R&Q’s own capital for reinvestment elsewhere and support a progressive distribution strategy.

Our unchanged 240p / share fair value assumption reflects trading post period-end, and outlook for higher quality revenue from the new structured Legacy division. That will move the rating from a sum of the parts for two distinct businesses to an EBIT multiple for both as Gibson Re’s book scales up.