RUA Life Sciences is a holding company for a group of medical device businesses focused on the exploitation of the world's leading long-term implantable biostable polymer (Elast-EonTM). 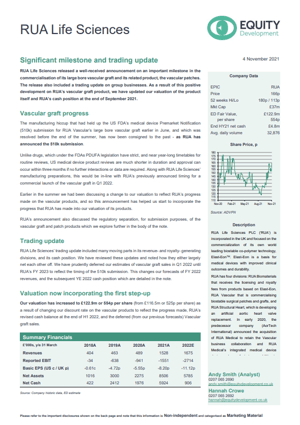 RUA Life Sciences released a well-received announcement on an important milestone in the commercialisation of its large bore vascular graft and its related product, the vascular patches. The release also included a trading update on group businesses. As a result of this positive development on RUA’s vascular graft product, we have updated our valuation of the product itself and RUA’s cash position at the end of September 2021.

The manufacturing hiccup that had held up the US FDA’s medical device Premarket Notification (510k) submission for RUA Vascular’s large bore vascular graft earlier in June, and which was resolved before the end of the summer, has now been consigned to the past - as RUA has announced the 510k submission.

Our valuation has increased to £122.9m or 554p per share (from £116.5m or 525p per share) as a result of changing our discount rate on the vascular products to reflect the progress made, RUA’s revised cash balance at the end of H1 2022, and the deferred (from our previous forecasts) Vascular graft sales.