Northbridge Industrial Services is now focused on Crestchic,  a specialist provider of electrical equipment used primarily to commission, test and service within power reliability and power security markets globally. It has substantially disposed of its Tasman division and is seeking to change its name to Crestchic Plc. 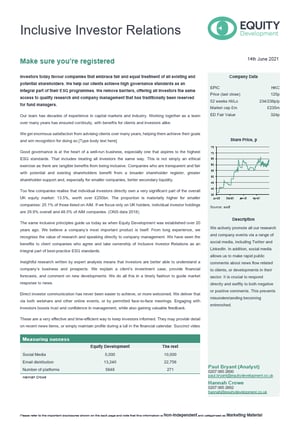 The headline news associated with the pre-close H1 update is that strong trading at Crestchic, plus a positive order book, results in an upgrade to our estimates for FY21. Revenues improved by 22% at Group level to £19.6m (the highest level since H1 2014) and by 44% to £15.8m within Crestchic alone.

The latter’s progress was led by sales into the data centre market but was widespread across several sectors. The outlook remains similarly impressive, particularly within Crestchic, and as a result we have increased our estimates, with adj. PBT rising to £2.5m (from £2.1m previously).

Crestchic’s performance was underpinned by continued strong growth within the data centre segment, albeit other areas such as grid resilience, renewable energy and oil & gas also performed well - the latter reflecting a project in Asia Pacific during Q1. Europe, the Middle East, and the US all delivered strong progress from Q2 onwards.

We think the stock-market is ignoring the strong trading momentum within Crestchic driving our upgrades. As shown in the note, NBI continues to trade at an undeserved discount to peers: on just a similar rating, the current fair value stands at a conservative 152p / share.

You can listen to note summary below, or download full note: